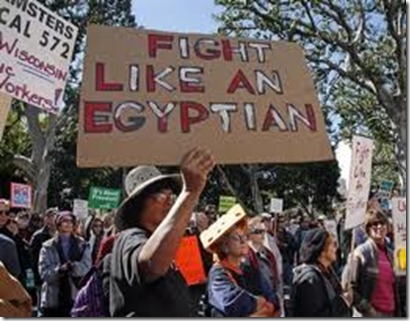 I am trying to understand why major stations in the US such as CNN, NBC, and ABC are not covering the Wisconsin Working Class Revolution.

Last night on CNN, Piers Morgan was talking with the Sexiest Man alive from the 80s. And CNN international was joking how Ben who is currently in Libya showered only once in the last week!

So, if there is no news coming from the Middle East, we just play dumb ass media such as Charlie Sheen stupidity. They spend hours analyzing how Charlie Sheen ruined his career! How about the Career of the people in Wisconsin who are actually fighting just to survive not to make millions of dollars!

We keep bragging about our free media and now it is the right time to ask how free we are talking about. I bet if Al Jazeera is allowed in the US, it will do a better coverage.

There are so many concerns about the level of Journalism in these major stations, but being bias is a new thing!

With or without you, the Wisconsin people will win!

I know the words " Working class Revolution" wont attract a lot of people.
I agree with you about union. My main point was the poor coverage from the major station in the US

thank you very much for stopping by. i really appreciate your comment.